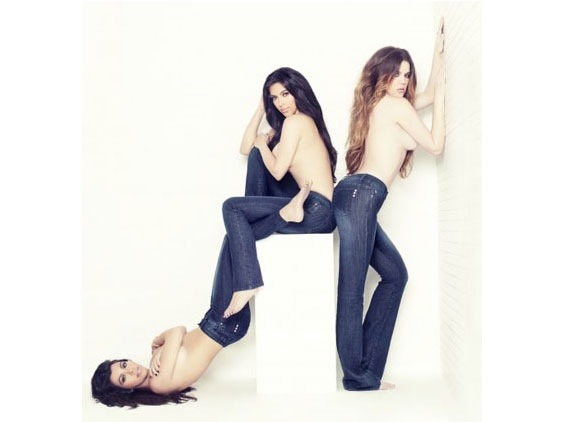 The Kardashian sisters have debuted their latest in their line of clothes from the Kardashian Kollection, a denim line modeled by Armanian beauties. The jeans are designed to fit women of different shapes and sizes and mirror the styles and preferences of each of the three sisters.

According to Kourtney’s blog, the sisters each wore her favorite jeans for the photo shoot, which was shot by photographer Nick Saglimbeni. Kourtney was wearing The Kourtney jeans (who old have thought), which are designed for smaller, petite figures and are skin-tight. Khloe was wearing The Khloe jeans, a tall, bootcut jean suited for curvy ladies who like a high-rise waist (curvy love that word). If you haven’t already noticed the pattern, Kim wore The Kim jeans, which are low-cut and have a straight leg.

Hmmm what do we think of the photo and the promise of a good pair of feminine jeans?

The Kardashian Kollection is available exclusively at Sears stores, or through the Sears website. If their other clothing and accessory offerings are any indication of whats to come, then their new denim line will sell off!

“Fashion Accessories + Tips for the More Fashion Conscious You!!“ 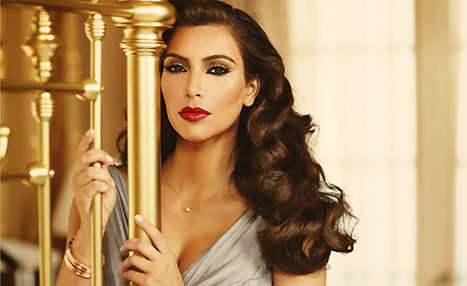 On Wednesday, the Kim and Kourtney Take New York star took to her Twitter account to announce the news directly to her 12.3 million followers — then gave them a sneak peak at the scent’s new ad campaign.

“A pic from my new fragrance ad campaign True Reflection, which comes out this spring! It is so different than my other fragrances!” the 31-year-old revealed along with a photo her hair done up in voluminous old-Hollywood waves while wearing a stunning red lipstick.

Kardashian’s ad campaign won’t be the first time she has paid homage to her late idol Elizabeth Taylor. In December, she spent $64,900 on a set of Lorraine Schwartz bangles, which once belonged to the icon.

We here at DivaBooStylesNyc, can’t wait to smell said fragrances, as she joins in the celebrity fragrance ranks along with Rihanna, Beyonce, Justin Beiber, Brittney Spears and Katy Perry just to name a few.

True Reflection joins Kardashian’s growing roster of namesake perfumes, including Kim Kardashian, Kim Kardahian Gold and Kim Kardashian Love (which was a limited-edition release that was gifted to the guests at her August wedding where she wed Kris Humphries— and whom she filed for divorce from in October)…O_o?!

“Fashion Accessories + Tips for the More Fashion Conscious You!!“ 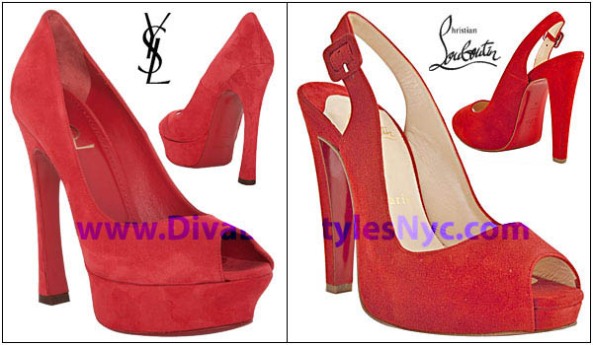 Divaboos…..oooohhh its a sad day sad! How is it that this is even happening!! Yves Saint Laurent vs. Christian Louboutin…please say it isn’t so!

Argument: Who owns the “Red Sole”??

Well Divaboos WE know who BEEN had it…BEEN using….BEEN pushing this outer sole color for very long! Now if your known for just one specific characteristic and history has shown just how often and long you’ve had this characteristic how is it that a replica..or a copy NOT acknowledge that this characteristic/trait has already been seen?!

Initially back in April 2011, Paris-based designer  Christian Louboutin, whose pumps have graced many fabulous and famous feet including Kim Kardashion, Kimora Lee Simmons, Kate Bosworth, J.Lo, Swizz Beatz, Eva Longoria and many others, sued fashion rival Yves Saint Laurent over the use of the color red on shoe soles.

“Mr. Louboutin is the first designer to develop the idea of having red  soles on women’s shoes,” said the trademark infringement lawsuit filed  in Manhattan federal court.  Since January of 2011 Mr. Louboutin has been requesting that YSL- America, a subsidiary of the Gucci Group, to stop  selling red-soled shoes in the same select Manhattan stores as he does.

Divaboos all I’m just saying is YSL we adore you but not for nothing are you serious??  I do NOT like confusion!! If the man already been doing it…not to say I agree with the usage of just one color…(Kim Kardashians line of shoes have outter soles in  blue, yellow, brown or white) but in the fashion world it is just what it is…Christian’s been doing it so please stopit.com! Um, Louboutin founded his first boutique in 1991 in Paris, the suit said, all his shoes have had red-lacquered soles which can fetch more than $1,000 a pair.

The lawsuit asks for a U.S. judge to impose $1 million in damages and order YSL to stop manufacturing similar designs.  Currently Yves Saint Laurant has YSL’s 2011 resort collection ready to hit stores of which Louboutin’s attorneys Harley Lewin of McCarter & English LLP have been trying to get Judge Victor Marreo to deny.

Federal judge, Victor Marrero, has today denied Christian Louboutin’s request that what they perceive as ‘copycat’ red soled shoes from YSL’s 2011 resort collection, are blocked from sale for the duration of court proceedings.  YSL’s sales are safe! “Get Money!”

‘We’re gratified that Judge Marrero has agreed with YSL that no designer should be allowed to monopolise a single colour for an article of apparel. As Judge Marrero indicated, YSL designers are artists and, like other artists, they should have the right to use the full palette of colours in designing their fashions for each season.

(August 10, 2011 Ruling) What Happened: In Marrero’s ruling that refuses the injunction, he wrote: “Because in the fashion industry colour serves ornamental and aesthetic functions vital to robust competition, the court finds that Louboutin is unlikely to be able to prove that its red outsole brand is entitled to trademark protection, even if it has gained enough public recognition in the market to have acquired secondary meaning.”

A judge will decide later whether to cancel Christian Louboutin SA’s trademark for high-fashion red-soled women’s shoes in the company’s lawsuit against Yves Saint Laurent America.

Louboutin’s lawyers urged U.S. District Judge Victor Marrero in New York not to convert his earlier refusal to bar Yves Saint Laurent from selling its own red-soled shoes into an outright cancellation of the U.S. trademark. The judge said today he will delay a ruling while Louboutin appeals his decision.

“The better course is to simply allow the appeal to proceed and halt any further proceedings till we get guidance”from the New York-based federal circuit court, Marrero said.

We’ll follow the story for further developments in this trademark infridgement I’m so sure it definitely does not stop here! Who will reign King of the Red Sole?!

Promote Your Page Too

Error: Twitter did not respond. Please wait a few minutes and refresh this page.

All images on www.divaboostylesnyc.com readily available on the Internet and believed to be in public domain All pictures unless otherwise noted are taken by DivaBooStylesNyc and or associates. Images posted are believed to be published according to the U.S. Copyright Fair Use Act (title 17, U.S. Code.). All opinions, views, comments are soley just that ones personal account and opinions, should you adhere to them is soley the individuals decision. DivaBooStylesNyc posts links to outside sites of which we do not control the content. If there are any questions please feel free to email the editor: divabooty@divaboostylesnyc.com. Copyright © 2011 DivaBooStylesNyc. © 2011 All text herein is property of the author(s) and may not be copied or reproduced without explicit permission.
Loading Comments...
%d bloggers like this: